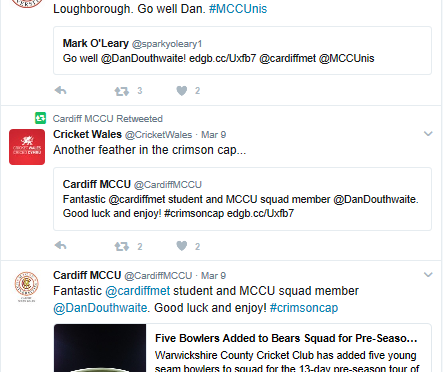 Yesterday the 2017 domestic season kicked off, (on British soil – the thrilling Champion County match was already in progress), and some players who have faced Stoke in the past were in action:

Kamau Leverock, (http://www.espncricinfo.com/mcc-university-matches-2017/content/player/364148.html), faced Stoke twice in 2012, once playing 1s League cricket for Dorking, and a few weeks later he was brought along as a ringer in Newdigate’s Sunday Social XI. He fell to a great catch on the line by Greg for a duck off the bowling of Nico, (in just his third appearance for Stoke), in a match that Jase and Malc will also look back on with a grin: http://sdacc.play-cricket.com/website/results/535683 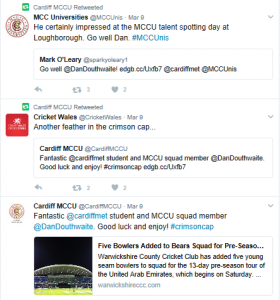 …sadly Dan didn’t make the final XI for the above MCCU match. He was also the only one of the five players taken to the UAE by Warwickshire who didn’t get a game.

After putting the word around with our sources he was bowling really well, but unfortunately picked up a knock in training. The medical people seem to think there may be a stress fracture. He will have a scan next week to determine what the injury is and its extent. Hopefully it won’t be a fracture and he will be OK for the start of season. We have been promised the result of the scan when done.

Josh Poysden featured in one of the recent North v South matches, and he was also in the wickets yesterday in Warwickshire’s friendly against Northamptonshire. He made occasional appearances for Dorking in 2011, including this one against Stoke – http://sdacc.play-cricket.com/website/results/1608210 – whenever his Sussex Prem club had a bye-week : http://sussexcl.play-cricket.com/website/player_stats_widget/bowling_stats/585531?rule_type_id=179 – thankfully that loophole in the rules that had a direct impact on our promotion ambitions that year is very much a thing of the past.