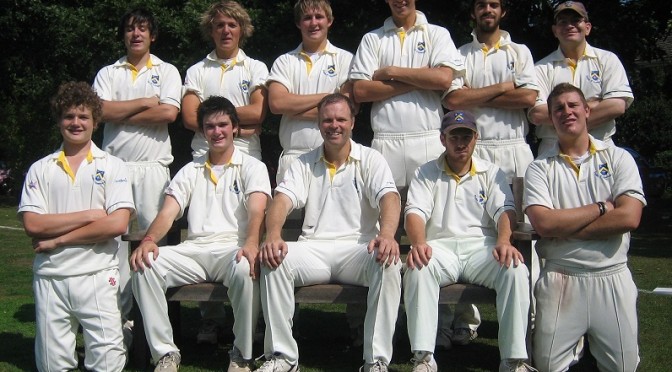 The next one in the series comes from Pagie:

Difficult to pick a greatest Stoke side for me as have been involved in so many. I guess my happiest memory of an SDCC XI would have to be the side that went Sanderstead and secured promotion to the Championship!!!!

Here is the team that day… 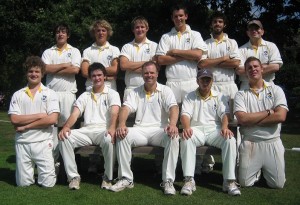 …the scorecard from that match : http://sdacc.play-cricket.com/website/results/1035802

…and the press report that went with it…

Victory over Sanderstead by 6 wickets confirmed Stoke D’Abernon’s second place in the Fuller’s Brewery Surrey County League and promotion to the Surrey Championship.

Stoke skipper Andy Page won the toss, completing a 50:50 record with the coin for the season, and inserted welcoming hosts at their picturesque ground.

Despite missing one or two regulars, Sanderstead’s openers Wallbank and Hollands took the attack to the bowlers, adding a run-a-ball 37 for the first wicket before Wallbank failed to appreciate a tactical field change by Page and holed out to Robbie Parrett in the deep off the bowling of the returning Sam Levido.

No.3 Udal continued to place his faith in an excellent home track, and following a frequent finding of the boundary, the scoreboard read 127 for 2 at the 25 over drinks break, Ralph Coleman being the only other successful bowler in the first session when Hollands drove to the covers where Will Gudgeon showed safe hands, a 25th catch in the field this season.

Stoke benefited most from the drinks as Jack Raimondo and Parrett reduced Sanderstead to 127 for 7 in a matter of minutes. Raimondo struck with his very first ball when Udal was plumb leg-before; then Parrett despatched Gilson and Robinson in the same over, bowled and leg before for ducks respectively.

Amidst the mayhem S.Carter had compiled a belligerent 41 with four fours and three big sixes; but when he picked out James Whitmarsh off the bowling of Parrett Stoke sensed an end was open. Whitmarsh and Parrett combined again to dismiss D.Carter for 13; and when Avery skied a Raimondo delivery to Gavin Greese at slip; Stoke were hopeful of an early conclusion to the Sanderstead innings with the scoreboard showing 143 for 9.

They did not reckon on a last wicket stand of 42, however. Key swotted an unbeaten 30 before last man Etheridge fell to a superb catch at the wicket by Tom Frost off the returning Gudgeon; justice for the bowler after he had earlier sportingly informed the home umpire that a return catch had not carried immediately after the finger was raised. Parrett returned career best figures of 4-36, Raimondo 3-20, both from eight overs.

After tea Gresse was adjudged caught at the wicket by Avery off Robinson for 6; but Tim Handel joined Raimondo at the crease and added 50 for the second wicket in 11.2 overs to get Stoke ahead of the rate.

Raimondo, less fluent than his 1000-run season suggested, departed for 29 when he picked out cover point; but a partnership of 56 between Handel and Parrett moved Stoke into a position of dominance.

Handel fell one short of a deserved half-century when the impressive Carter nipped one through his defences; but despite the loss of birthday boy Will Patrick, Frost and Parrett knocked off the remaining runs without further loss in an unbroken partnership of 53; Parrett hitting an unbeaten 55, (with eleven fours), to complete an excellent all-round performance; Frost making the winning hit and walking off unbeaten on 13 amidst scenes of jubilation within the Stoke players and supporters.

After fifteen seasons of enjoyable Fuller’s League cricket Stoke now head for the new challenges offered by the Surrey Championship.

Pagie has been in everyone else’s best XI so far, so technically is he preserving his record, here? Let’s see if he make his own World squad and final XI when selected!

Keep sending your Greatest XIs, (can Stoke, World or both), in to stokecc@hotmail.com – if web-site ‘hits’ are anything to go by these articles are the most popular viewed.