Sixteen different players appeared in what turned out to be a reduced Under 19 T20 Blast programme in 2016, availability savaged by injuries and holiday commitments. Nevertheless when the squad took the field they showed growth and learning that they took into their weekend longer format cricket. 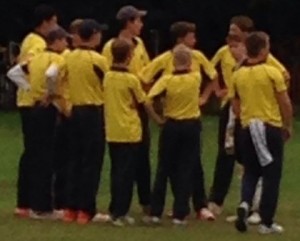 Despite the disruption and the challenges we faced, our thanks go to Giacomo Gray for running the side on matchdays as we bought into the ethos of the competition to get the younger players running the show…with the odd bit of senior assistance along the way, notably from Sarah who helped populate sides.

Our 2017 Trust League handbook entry is below which provides a review of Stoke Slayers’ 2016:

We lost an opening game we really shouldn’t have at home to Chessington, (Oliver Trower 35, Fred Zander 22 not out & 2 for 22, Charlie Hill 2 for 17); before injuries and holidays meant we were unable to play matches against East Molesey and Esher; although we did play the former in a friendly with some seniors making up the numbers to get a game on; the seven “Under 19s” – some much younger than that – doing all the batting and bowling and helping us to a nine-wicket win.

We focused on the must-win matches against Oxshott and Walton-on-Thames before looking to replay the postponed games. We won the first one easily thanks to six of seven bowlers used sharing wickets, (Nico Spreeth leading the way with 3 for 19), then Trower, (retired on 51), set things up for Alastair Curran to finish the chase with an unbeaten 27.

Fortunes fluctuated in the match against Walton, that we ultimately lost in the last over. Ed Ashwell, (32), and Trower & Spreeth, (31 each), got us to a score, and we were ahead at most points in the fielding effort; but the way Walton clinically accelerated the run chase gave us a pointer or two on how we can become more effective in this format in future seasons.

Sadly with the earlier two postponed matches now having no impact for us or the other clubs involved as the group was already decided, we aimed for more replays for development purposes. We raised teams on days others couldn’t and vice versa, so there was no chance for us to improve on a pretty ugly final position in the table given the talent pool we had at our disposal. We will look for significant improvement on and off the field next year. 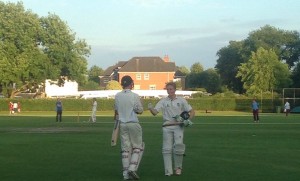 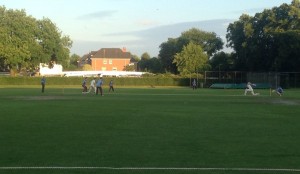 Pictures from the friendly we played at East Molesey. Giacomo Gray replaces Nico Spreeth, (retired on 51), and hits out with Fred Zander, (40 not out), at the other end.

Thanks also to those who took the  ECB Activators Course. These things are worth doing. All Stoke entrants went into a ballot and we won a couple of ODI tickets for the England v Pakistan match at The Rose Bowl for Jo to distribute. 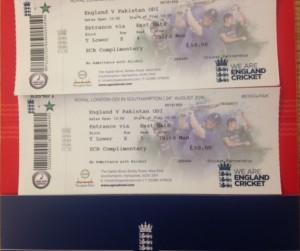