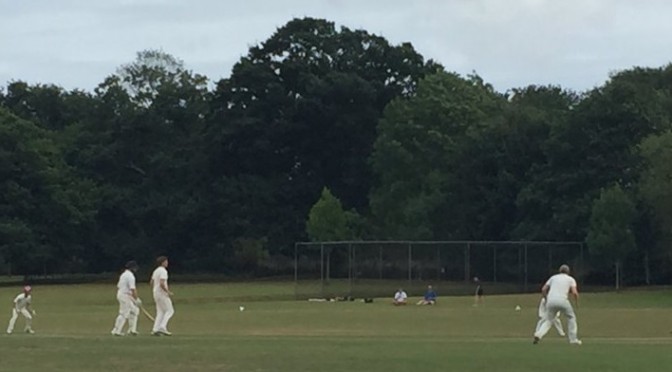 After a few near misses Stoke’s 1st XI finally secured promotion to Division 4 with a home win over Alleyn, the victory achieved on run-rate although once the 20 over mark had been reached to constitute a match, Stoke were never behind the target score.

The visitors needed a win to stand any chance of finishing outside the bottom two, and despite their lack of runs this year, opted to bat on winning the toss.

Stoke got stuck in straight away as Toby Tarrant took wickets with the first balls of his first two overs; Norris top-edged a hook that was well caught by Charlie Hill at fine leg; then George got a leading edge that ballooned to slip where James Miller took a few paces back and took an easy catch. 5 for 2.

From then on runs were traded for the odd wicket as the match took shape; the visitors looking to post a total in excess of 200, Stoke looking to limit the chase. As he did in June Bridgeman scored a lot of runs either side of backward point, and he hit a six and ten fours.

He lost two partners on the way; both to Dan Gluckman, (10-2-34-2), who snared Eadon leg-before for 13 and then got one to bounce from the surface that took the shoulder of Foley’s bat and nestled in Miller’s hands at slip. 104 for 5.

Bridgeman found another willing partner in Everitt, (another to play in the earlier mentioned 2s match), and the pair moved the total to 141 before Stoke checked progress with two quick wickets. This time Nico Spreeth did the damage, taking two return catches; the first a good one to account for Bridgeman for 63, the second an easier chance to remove No.8 Madan for a duck.

At 149 for 7 Stoke looked for a quick kill and reintroduced Miller; but the pace on the ball was surprisingly beneficial to the visitors. 34 runs came in one untidy four over period as the ball ended up in unusual areas.

Arnold made 15 before he was castled by the returning Hill; and this was the first of three quick wickets to fall to close the innings on 188 after 46.5 overs; Miller, (2 for 36), taking his season’s count to 43 @ 12.63 with the last two; bowling Everitt for 41, then No.11 Bevan gloved to Jack Raimondo who did a good job behind the stumps standing in for the absent James Whitmarsh.

James Trower and Ian Hopton started the chase cautiously against Bevan and Foley, but once they had hit a few fours to get the board moving Stoke were soon up with the required rate. Trower, (who was unlucky to see two fierce straight drives hit the stumps at the bowler’s end), hit a straight six to force Bevan to remove himself from the attack; Hopton hit a number of good shots too – unfortunately many of them to fielders. The opening stand reached 61 by the 15th over before it started to drizzle.

Stoke then had an iffy ten minutes where three quick wickets were lost. Conscious of the need to be ahead of the rate were the rains to come in; Trower departed for 31 when he was unable to clear the fielder trying to go over the top, Adrian Taylor slashed to gully, then Hopton, (30), fell to an incredible one-handed catch on the line by Eadon to leave Stoke 65 for 3 and give Maori Oxshott cause for optimism having secured the win they needed to give themselves a chance of promotion.

Spreeth and Miller continued to play positively – Miller hit a nice six and a four – and moved the total to 91 before the former hit a return catch to Eadon. No.6 James Corbishley ran the first ball he faced through the vacant slip area for four, and drinks were taken with Stoke still ahead but the rain now getting heavier.

The first over after drinks saw Miller depart leg-before to Eadon, (2-0-7-2), and Jase Earl had time to hit a single before the call for the covers came with the total on 103 for 5. Stoke needed to be 98 at this stage so things were in their favour as the target would be reduced for every over lost.

As it turned out there would be no more calculations required. Within minutes puddles started to appear on the outfield and visiting skipper Bevan was quick to suggest that no more play would be possible and Stoke were the victors by virtue of their superior run rate.

Would Stoke have won had the game gone the distance? We would like to think so as runs down the order has been a strength this year and the combined batting averages of the not out and next in batsmen were greater than the remaining runs required; so whilst a run-rate win is never the most satisfactory outcome, promotion has been secured over the entire season where all 28 players used have made meaningful contributions when selected.

Celebrations continued long into the night, and messages of congratulations are pouring in from players not there on the day, supporters, former players and opposing clubs which we collate for a separate article on this site in due course. We now have a few friendlies to close out the season before we plan for next year’s League programme.