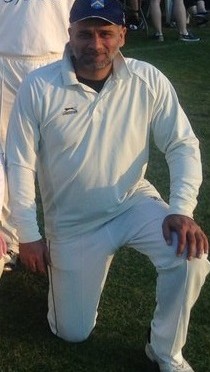 Hampton Hill accepted our invite from the list of clubs looking for a Sunday fixture this weekend and the sides played out an exciting, good spirited encounter.

The match nearly didn’t take place at all, which would have been a tragedy, as Hampton Hill’s fixture man was a little concerned that his side might be too weak when the call was put in on Thursday. Having given him assurances that we were a traditional Sunday XI mix this week without any first choice ‘league’ players the deal was struck.

At the toss, which we thought would be a mere ceremonial thing given the above discussions, the gloomy skies led to a successful request for a 40 over match rather than a timed format, (as our followers will know we hate batting first in timed cricket), but in return this was met with a request/condition from the opposition that we would not hold them to eight overs maximum per bowler as they were worried about their bowling depth. We’re an obliging lot who play nice, and duly agreed, but it was strange to then see the opposition skipper, (nice chap but he TFC’d and had clearly lost his role of director of on-field operations by the end of the match as his ‘league’ players took over the field placements and bowling choices), chose to bat. Had we been hustled? Probably not, but it made for an exciting day!

Play began with Matt Mustill opening the bowling with Rick Mustill keeping wicket. Great to see the pair back at Stoke for their annual appearance, (although we’re working on it being a more frequent thing.)

Mustill Jnr and new ball partner Raja Singh bowled well without luck and the score moved to 30 for 0 by the end of the 8th over. Things changed when Chris Finch made one of his famous in-game dashes from the car park in his whites without checking into the changing rooms first; allowing Alistair McMillan to move from slip to ‘drive man’ where he duly held on to a stinging catch off Zonneveld’s blade to give Mustill, (6-2-10-1), a deserved wicket.

Back after a few weeks away Luke Kirchner did a commendable first change job, and he took the second wicket when Jonasus, (15), offered no shot to a ball that started on a 5th/6th stump line but jagged in and bent back his off-stump. 36 for 2 in the 12th.

An attritional period followed as Kirchner, and the next bowler in the queue Moumer Khara bowled tidily. Khara took the threat of being taken off as a motivational tool, earned another two overs after drinks and got a wicket with his last ball when Bhatti chipped one over him and Ralph Coleman moved from mid-on, (arguably covering more distance he did in the entire fielding effort the previous day – no heat maps to prove this but highly probable), to take a decent catch between the umpire and mid-off. Khara ended with 6-2-20-1.

Alex Clinton and Coleman then shared the next few overs and the scoring rate declined rapidly. Clinton, (5-2-5-2), gave little away and picked up two wickets; No.4 Rutherford walked across one and was leg-before for 20; Gunatunga in contrast didn’t trigger and was bowled for 8. Coleman returned figures of 5-2-7-0 that included an edge through slip for four as one of just three scoring shots.

The total was only 81 by the end of the 30th over and instruction to get on with things came from the boundary. Singh, (7-2-18-2), profited with two wickets, a great running catch by Matt Mustill and a good low grab from Stephen Finch who moved well from gully when one popped. 85 for 7 and some game management was needed.

McMillan tempted the batsmen; found one obliging customer in Butt who holed out to Matt Mustill at cow for 13; but Fahey, (22 not out), and Blair, (8 not out), lifted the score to 131 for 8 despite a great death over from Chris Finch.

We were indebted to Jo for another monster tea that was well received by all, and the drizzle that appeared at the end of the first innings had gone by the time the sides re-took the field.

Stoke made a poor start when McMillan was bowled playing back to one that kept low; Chris Finch somehow managed to scoop a leg-side bound delivery to the keeper having hit one nice four; and Rick Mustill was bowled for 2. It was 11 for 3, (all wickets to Butt who had an opening spell of 7-4-7-3), and Stoke needed to bat some overs and consolidate.

Hampton Hill more than took up their opportunity to give unlimited spells to the bowlers. In addition to Butt’s spell, Zonneveld bowled 10-4-16-1, (picking up Stephen Finch for 12 attempting to clear the infield to make it 39 for 4), and No.3 bowler Palmer also bowled a ten over spell…and would later return at the end. Three bowlers would ultimately bowl 31.1 of the 38.1 overs Stoke would eventually face.

Tom Dennis showed incredible maturity beyond his years and gave great support to Khara as the pair batted cautiously, yet they still doubled the score by the mid-point of the 29th over to keep Stoke going. When it looked like Dennis was set to complete the mission given to him by his captain at drinks, (40 for 4), to change nothing and bat through, he got a good yorker from Palmer and departed for 19. This contribution should not be underestimated. He was successful in tiring the bowlers and this set things up nicely for the lower order.

Khara did lose some partners as he looked to up the scoring, (the rate crept above fives for the first time); Clinton played some nice shots but edged to slip; Matt Mustill skied the second ball he faced and was well caught; and Kirchner was bowled having hit one nice 3. 100 for 8 but Khara had spread the field after hitting the game’s only six.

30 were needed off the last five overs. A tricky ask given the overall match scoring rate, but the first three of them yielded 8, 10 and 10; not just from Khara’s bat, but that of Singh who got bat on nine of the thirteen balls he would face, and made 21 not out to take Stoke to the brink of victory with 12 balls to go.

Fittingly Khara made the winning hit off the next ball to finish 44 not out from 57 balls faced, (36 of them dots – for those who know him that’s not usual!), and Stoke completed the most satisfying of wins given the sequence of events at the toss and the agreement to bend the traditional playing conditions for a 40:40 match.

For the second day running we also had an opposition stay back for a while after the game to chat cricket, common opponents, etc, and we’ll look to make this a permanent thing going forward; perhaps also putting a reverse friendly fixture in at theirs for our 3rd XI on a Saturday next year.

Next week we face our friends from Worcester Park at The Rec. Send your availabilities in ASAP, please! (Rod – who kindly kept score after tea – is already confirmed after his injury has cleared up.) 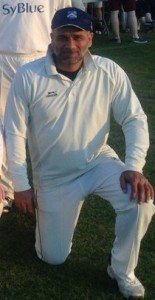