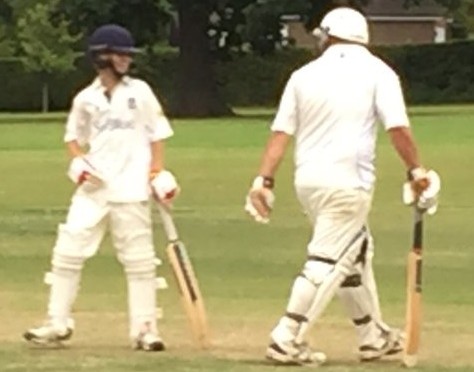 A second successive 100% weekend at all levels for the Club as the Sunday XI made relatively short work of a Maori Oxshott side that contained a few veterans and a sprinkling of colts.

Despite Stoke’s side having more of a ‘league’ look to it, visiting captain Depree chose to bat on winning the toss; and Stoke didn’t take long to get themselves on the board, reducing Oxshott to 23 for 3 after 11.2 overs on a tired pitch.

Ed Ashwell struck first. Having taken a return catch off a waist-high full toss in his first over, (batsman recalled), he found J.Davies’ edge in his second to give Will Thomson an early dismissal on the scorecard in his 100th appearance for the Club.

Richie Parrett took the second and third wickets to fall. Ewart, back on the field for the first time in a few weeks after sustaining a nasty industrial injury to his thumb; smoked one six into the car park, but perished the next ball aiming for a repeat as Jeremy Connell took a good high catch in front of a decent crowd that had assembled in front of the pavilion. P.Davies departed in Parrett’s next over, hitting to Ashwell at backward point.

By the time the third wicket fell, first change Jack Townsend was into a quite astonishing spell. Having conceded a single in his first over, the remaining six overs were all maidens, (yes 7-6-1-0), and it was a travesty that he would be the only Stoke bowler to not take a wicket all afternoon. He bowled full & straight and beat the bat repeatedly.

Townsend’s work allowed Ralph Coleman to get a few overs back into his legs after illness; and he took the fourth wicket when Saker, having hit him for two fours, was unable to get bat on a straight one that kept a little low and he was leg-before, the decision given by part-time/occasional Stoker Baz Medlycott.

This was the last wicket before the drinks interval that saw the board showing 45 for 4, most of the runs scored by Gavin Harper who benefitted from a number of dropped catches ranging from difficult, (a great diving effort that didn’t stick by Connell), to very easy, (Parrett) – Nico Spreeth was the unlucky bowler.

Alex Clinton entered the attack after Townsend’s enforced withdrawal due to his age, (or lack of it), and carried on the good work. He wasn’t able to hold on to a difficult chance of his own bowling, but took a deserved wicket when Barnes hit to mid-on and Townsend showed good hands. 54 for 5.

Spreeth, (3-0-7-2), finally found a couple of people able to hold a catch off his bowling, (one of them another good catch in the deep by Connell), and made it 60 for 7 with the wickets of Harper for 23 and Murphy for a duck.

A bit of game management was now needed. Connell and McMillan shared the last 5.1 overs of the innings and shared the last three wickets to fall. Medlycott missed a full-toss from Connell that was called no-ball by the square-leg umpire, and electing not to challenge Medlycott continued and made 28 off 20 balls with one nice straight six over cover. With the total on 102, however, he fell to an outstanding diving catch by Clinton in the covers to give McMillan his solitary wicket for the afternoon.

After a huge and typically excellent tea by Jo; the order was set so that those who didn’t get a bowl would get first chance to have a bat. Malcolm Dickson and Asif Ali, (the latter making a comeback appearance for Stoke after a year or so away), made steady progress against the new ball; Medlycott being one of the opening bowlers trying a bit of seam-up that wasn’t too bad.

The opening stand reached 38 when Dickson chopped a ball from first change Barnes that kept a little low onto his stumps. Ali Mac joined Asif Ali and the two Alis added another 34 runs; the majority from the bowling of Hansom who continued to lob the ball into the sky. Asif hadn’t seen anything like it and batted cautiously; McMillan picked the right ones to hit.

More of the younger players were give a try with the ball as Oxshott started to run out of runs to play with. Murphy collected Asif Ali’s wicket when he mis-pulled and skied the ball to the keeper and departed for 23; McMillan, (21), was leg-before to Ewart with the total on 82; but Thomson finished things quickly – and just before the rain came – hitting four fours in successive balls in one Murphy over.

Thomson batted with No.4 Clinton who showed his class in his short stay at the crease. He made a chanceless 13 not out and when he grows, a number of the shots he played will go for four in future seasons.

Thomson, (19 not out from 13 balls), made the winning hit off the last ball of the 23rd over. Cue the mass movement of people into the bar to avoid the rain that arrived just after the players shook hands.

Both cubs were well-supported, and with each finishing their Championship campaigns with a pair of home games, there was much speculation on the possible results permutations as everyone stayed back for a while and made a very healthy contribution to the bar takings.

So a good day to end a good all-round weekend for Stoke. In hindsight, perhaps finding someone capable of winning a toss to secure a bat first would have made things better for some.

Next week, Stoke have a blank in the fixture card but the ground is free and we should be able to source a fixture. Keep an eye on the web-site for details.