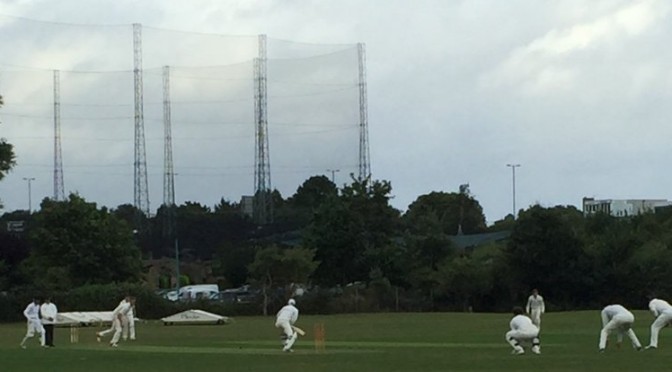 Stoke’s 1st XI maintained control of their own destiny with a win at Old Emanuel.

Inserted having lost another toss, (that’s 11 out of 15 lost now), Stoke openers Dan Gluckman and Ian Hopton made steady process on a green pitch that rewarded bowlers whenever they put the ball in the right area. Hopton looked good for his 16 until he clipped a half-volley, the first ball from first change A.Butt, to square leg. 26 for 1.

Gluckman reached 23, and the score 80, when he hit to cover in the 18th over; a wicket for sixth bowler Ekhpewak as home skipper Ahmed was trying to get through his lower-ranked bowling combinations early. Stoke took an important 24 runs from this bowler’s four overs.

Ahmed himself had tried to slow things down with his off-spin; but took himself off once N.Butt had given him some control from one end by bowling left-arm spin over the wicket targeting the thigh pads. N.Butt bowled his ten over allocation through for the concession of just 34 runs but the chance of wickets was sacrificed with this tactic, allowing Stoke to build a score.

Will Gudgeon, who swept well, and Nico Spreeth batted with minimal risk, took what was on offer and put together a third wicket stand of 57 to leave Stoke well placed at 137 for 2 in the 33rd over.

Shortly after completing his half century, (incredibly his only one of the season), Gudgeon was leg-before to N.Butt for 51 from 85 balls faced. This set things up nicely for James Whitmarsh who ran aggressively in what would be a short time at the crease.

Whitmarsh and Spreeth pressured the fielders into one or two mistakes, but Whitmarsh picked on the wrong fielder and was run out by a direct under-arm throw when he had made just 10. The very next ball Spreeth, (34 from 45), was bowled playing back to one from Ahmed who returned to the attack to complete his spell and finish with 10-2-33-1; and at 154 for 5 Stoke were in that position where things could have gone either way.

Neither Jase Earl nor James Miller had faced a ball when they came together, and initially opted to bat some overs and see where things went. They dealt almost exclusively in singles – although Miller hit a nice straight drive for four – and they raised the total to 172 before Miller, (12), was bowled by another that kept low, (this was starting to look like a good toss to lose), signalling the arrival of Will Thomson at the crease.

Earl and Thomson had 8.4 overs left of the innings to bat and used them to the full, adding 57 to take the final total to 229 for 6. Opening bowler Malik had five overs left, and was asked to bowl them all in one spell into a stiff breeze, and as he tired, with little support from the other end Earl and Thomson cashed in.

Earl ran hard and Thomson hit the innings’ only six when Malik tested him with a bouncer. Later in his innings Thomson picked a slower ball and it also disappeared one bounce over the line. Sixteen runs came from the last over. Earl, (24 not out), and Thomson, (31 not out from 26), had given Stoke excellent momentum going into an excellent tea.

Play resumed, (at close to 5pm after a pitiful over-rate from the home side despite bowling 24 overs of spin), with the key contest of Miller versus Mohamed, the latter having smoked a 44-ball hundred at the Rec a few weeks ago. After five dots, the sixth one disappeared miles over deep square leg and the home side were off and running in pursuit of a much needed win to ease their relegation fears.

At the other end Toby Tarrant settled into his work, and made the first breakthrough when a puff of dust saw a ball to Kaushik roll and he departed for a third ball duck. 6 for 1 was soon 7 for 2 when Miller knocked over Raza’s leg-stump.

Mohamed was determined to play his way and took the hook shot on against Tarrant, the ball falling agonisingly wide of Gluckman at deep fine-leg, but later in the over he shuffled across his stumps targeting the vacant mid-wicket boundary, missed and was leg-before for 12. 13 for 3.

This forced the hosts to bat some time and clear their heads. Ahmed and Khan did this to a degree, although Khan was well-caught by Spreeth at slip to give Miller his second. 19 for 4.

Tarrant continued to run into the stiff breeze and limit the batsmen to a handful of singles. He took his third and fourth wickets in his seventh and eighth overs; A.Butt was cut in half and the ball took an inside edge on the way through to Whitmarsh, (who kept another clean sheet behind the timbers); then one spat at Ekhwepak to give Will Thomson the easiest of catches at point off a leading edge. It was 29 for 6 and Stoke were in complete control.

Charlie Hill backed up Miller’s good work, and by the time Tarrant, (10-4-13-4), had left the attack the asking rate had already gone above a run-a-ball.

Ahmed and No.8 Naqvi, the latter batting positively despite the match situation, did move the score to 66 by the drinks break; but in the first over after the resumption Hopton bowled to Ahmed, (24 off 64), it took the edge, Gudgeon did the rest at slip and Stoke had their seventh.

With just the tail to work with Naqvi started to decline singles in the hope of getting his team somewhere near some batting points, or even less likely a win. No.10 Malik gave him some support and hit Alex Bond for successive fours, but when he next faced Hopton he was bowled by one he played down on and the ball rolled back onto the stumps.

N.Butt was leg-before to the returning Miller, (9-4-20-3), leaving Naqvi and last man F.Butt with an improbable mission of scoring 66 runs for just a solitary batting point, or even more unlikely 146 for the win.

Naqvi marshalled the strike well and hit five fours and two nice sixes to move to 44. The second six was well caught by Miller off Hopton – but sadly ten yards over the line – the very next ball the same c Miller b Hopton combination was in operation again, this time ten yards inside the boundary, Hopton finished with 6.2-1-27-3 and Stoke had completed a 120 run victory well after 7pm…with more than 14 overs left.

A good afternoon’s work for Stoke who were missing a few players who are available for selection for the last two games, (both at home), against Battersea Ironsides and Alleyn.