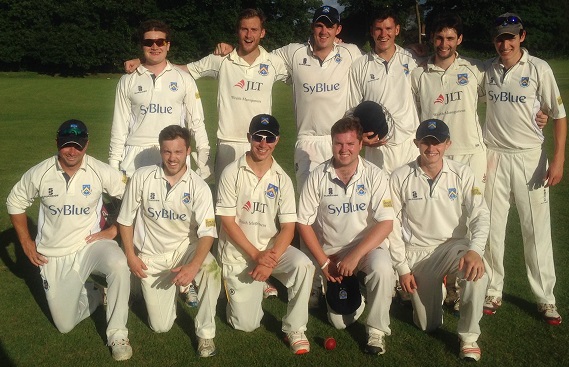 Stoke recorded a vital victory at Haslemere to get their promotion bid back on track.

Results on Haslemere’s ground this season suggested that this could be a low-scoring affair with some low second innings totals, so being inserted on losing the toss might not have been such a bad thing to happen; and when Nico Spreeth had one jag across him to give home skipper Thayre an early wicket, thoughts immediately turned to getting a score, any score, and bat as many overs as possible. Stoke had the mix of batting styles to do both.

Ian Hopton fought hard as Thayre and fellow new-ball partner Ellis found conditions to their liking. Will Gudgeon opted to take the pitch out of the equation and cracked four fours in his 22 before falling to a worldy one-handed catch by Sturt to give Ellis his wicket. James Whitmarsh batted with equal positivity, and having smashed three fours of his own, edged Thayre to the keeper and departed for 13. 54 for 3 in the 11th.

Stoke were in a bit of a hole when a ball from Thayre, (3-35), lifted more than expected and Hopton, (15), mis-pulled to square leg; leaving captain James Trower and James Corbishley the task of batting some time.

Although the pair added just 14 runs, they batted an important eight overs between them to see off Thayre and Ellis, (7-3-20-1), and negotiate a handful of first-change May’s allocation. Left-armer May settled into a good rhythm and conceded just seven runs from his first seven overs, challenging the batters’ patience with a wide line but was unable to find anyone to give anything away.

Spinner Williams found some turn and collected the wicket of Trower for 7, (69 for 5), when he scooped to gully; but Corbishley and new arrival James Miller batted with extreme caution to preserve wickets and take things deep.

The partnership of 15 – all to Miller who hit three fours – ended when he could nothing about one from May that turned him and was edged to the keeper. May then ended his ten-over allocation with the wicket of Alastair Curran for 4. May 10-4-15-2, Stoke 92 for 7.

Corbishley was starting to run out of partners, and lost another with no addition to the score when Alex Bond was adjudged caught at slip off fifth bowler Cronan who found savage turn and bounce from the surface.

An important cameo from Tarrant followed. He took 12 of his 14 runs in one over from Williams, including the match’s only six, and this formed part of a 9th wicket stand of 20. There were 11.3 overs left at the point of Tarrant’s dismissal when he skied to slip attempting another big hit, (the first nine wickets were all caught); but oddly Haslemere opted not to reintroduce opener Ellis immediately, holding him back for the last three overs from one end. Stoke took advantage.

Sixth bowler Hooker bowled two overs for nine runs, Corbishley and Charlie Hill added another vital 17 runs for the last wicket before Hill, (who negotiated 20 balls for his partner), got a good nut from Cronan, (5.3-2-15-3), and the innings closed on 129 mid-way through the 45th over.

Corbishley again proved what a great match-player he is, and was left stranded on 32 not out from 77 balls faced with three fours. His efforts gave his team something to bowl at, Stoke’s job now was to turn a gettable total into a formidable one.

What happened after tea was simply magnificent, (if you were a Stoke fan), those there witnessed one of the finest bowling and fielding performances – backed up by tactical excellence – by a Stoke XI in eight seasons of Championship cricket.

Spooner, (9), got a snorter from Miller, Whitmarsh doing the rest, to get Stoke on the board; Sturt, (10), was bowled mis-pulling a delivery from Tarrant, (23 for 2), onto his stumps; and the middle order were simply given nowhere to go – batsmen 3 to 7 scored 13 runs between them off 75 balls.

Four of Miller’s overs were held back, and by the time first change Charlie Hill and Tarrant, who bowled his allocation in one spell, had left the attack, the home side’s innings was in tatters at 30 for 6.

Hill took his first career 1st XI wicket off the last ball of this opening over when he ran one across Hooker, and he was running at figures of 2.2-1-3-3 when next he castled Boxall; then May, who had seen enough struggle and scratching around by his colleagues and opted for a more positive approach, fell to a great low catch by Miller at slip and departed for a duck.

Hill’s wickets were split by another two from Tarrant. Eastment was caught at the wicket, and with one more big effort off the final ball of his allocation, Cronan’s stumps were demolished. Pictured here…

Tarrant finished with figures of 10-4-19-3, nine of them coming from one over.

Dudley tried to bat with the same positivity shown by May and was initially successful and hit Hill for a few fours to spoil his figures a little and move the total from 30 for 6 past the fifty mark; but Miller was brought back and took wickets in his next two overs to leave the hosts nine down.

Dudley, (18 from 20), served up a return catch, Miller shifting his weight after following through to make a great one-handed grab off his own bowling; and it was 60 for 9, (Miller 9-0-21-3), when Ellis could only fend one off his face to give Whitmarsh a fourth catch at the wicket. Whitmarsh also kept a clean sheet behind the stumps.

Due to a hand injury sustained in the field Haslemere ended up with a competent No.11 in Williams. Thayre dug in at one end, (he had to as Bond was into his groove from the off and gave nothing away either), and Williams did make 21 at the other before the match ended; but Hill sparked off the celebrations when he showed great composure under the high ball to complete the win off Hopton’s bowling.

The margin of victory was an emphatic 45 runs.

Stoke started the day knowing every one of the last four games needed to be won and somewhere along the line one of the other promotion chasing pack needed to lose or tie one in order for them to regain control of their own destiny. By the end of the day said combination of results had occurred, and with the 2nd XI match, (still in progress as the players returned after several post-match drinks at Haslemere!), ending with a positive outcome also, this was a great day for the Club.

However, proceed with caution. The last two times Stoke have had matters in their one hands they have suffered defeat in their next match, one of them to next week’s opponents Old Emanuel who look to be in good form as they continue to string results together in their bid to stay in the division.