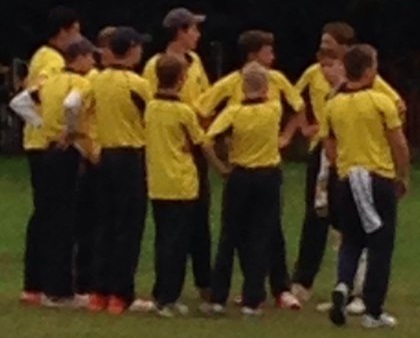 Again Stoke were involved in an excellent T20 Blast contest but again they ended up on the wrong side of a close game.

Rain-threatened skies all evening leant Walton’s skipper to choose to field on winning the toss, and Stoke took full advantage of the chance to put runs on the board quickly as Ed Ashwell tweaked his method from the Oxshott match, and Olly Trower continued his good form.

A partnership of 46 in just 4.5 overs resulted as Ashwell crashed the ball everywhere and Trower pushed the gaps, more gaps than usual as the opposition started their fielding effort a man light.

After hitting his second six to move to 31, Ashwell played back to L.Minhell and the ball went back onto his stumps. This was just the 17th ball he had faced, he also hit four nice fours, one of them pictured here…

Nico Spreeth joined Trower and the pair kept thinks ticking over nicely until Trower hit the one fielder on the circle on the leg-side and departed for 32 from just 27 balls faced.

Acting Captain Alastair Curran was next in and hit a nice straight six of his own before a mix-up saw him lost to a run-out for 14. Ollie John was still a little scratchy since his return from holiday and having survived the easiest of return catches, he was bowled playing back in the next over. 110 for 4 at the end of the 14th.

Spreeth found another partner to stay with him in the form of Cam Tarbet. Tarbet struck the ball cleanly and hit a six and a four in his stay at the crease that saw 35 runs added in just over four overs; Tarbet scoring 19 of them.

Two more wickets were lost in the pursuit of quick runs. Spreeth hit to Firth on the circle for 32 then Alex Clinton unselfishly sacrificed himself trying to turn a single into a two.

This left Charlie Hill and Jack Townsend the last few balls to face, the last one picture here…

…that saw the total raised to 153; decent for the pitch.

The need to get five overs bowled quickly to constitute a game meant Billy Zander and Hill raced through the first eight overs. The first five were Stoke’s best spell in the field all evening – just seventeen runs conceded, no boundaries, sharp fielding and only a couple of wides. This period also brought the first wicket when Ben Townsend showed remarkable composure under a difficult chance to him at cover to give Hill the wicket of Sharpe.

After that there was a period of untidy fielding, the noise level reduced accordingly and unnecessarily heads dropped. Walton pounced on this and Davis, who scored 40 in this fixture last season, started to pick the rate up. Hagger followed his example and a partnership of 53 in under 8 overs put the game back in the balance.

Spreeth tipped the scales back in Stoke’s favour with two wickets; both catches to Hill in front of the bench at the Blundell Lane where the Club Captain and his mates parked themselves for most of the evening; and the enforced retirement of Davis on reaching 51 not out meant Stoke had new batsmen to try and dismiss.

Again things went a little flat. Ben Townsend castled Watkins for just a single; but the odd difficult chance didn’t go to hand, the wide-count increased and the fielders were starting to struggle to see the ball in the gloom leading to a few singles being turned into twos.

No.6 Vyvyan took the chase by the scruff of the neck and looked to farm as much of the strike as possible. He was generally successful and in partnership with A.Minchell another 30 runs were added before Jack Townsend shattered Minchell’s stumps for just 9.

This brought No.8 S.Davis to the crease with 29 needed off the last 16 balls. Incredibly he didn’t need to make one scoring shot as Vyvyan marshalled the strike, completing a couple of suicide byes to the keeper along the way, and a big 19th over, tasked to Ashwell who had barely touched the ball in the field to that point, saw the ball land in unusual areas, one them saw a bouncer mis-hooked over the keeper for four to leave just seven needed off the last over.

Bat on ball and/or run everything to the keeper was the plan, and aided by a few more wides, (Stoke again lost the extras count 28 to 16), this left the scores level with three balls to spare. Vyvyan, (35 not out), needed just the first to scramble the winning run.

So congratulations to Walton, in particular O.Davis and Vyvyan who engineered the run chase superbly. Spreeth, (2 for 27), led the bowling effort where most did well but there was probable room for improvement in all. The discussion afterwards was much about making sure that learning how this game was won and lost, (it was neither thrown away nor was there a freak individual performance to leave a scratching of heads), should be taken into future matches.

Finally, thanks to Sarah Trower and Will Thomson for running the BBQ, and to Rod Thomson for keeping score.