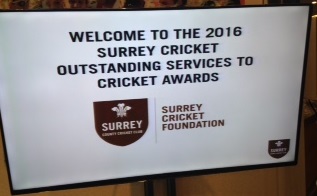 Yesterday saw the latest annual Surrey OSCAs, (Outstanding Service to Cricket Awards), held at The Oval to coincide with Surrey’s One Day Cup match against Glamorgan.

Stoke were represented by Rod & Will Thomson and Ralphie & Julie; James Trower came along after work for the food and to discuss selection. A number of friends of Stoke were there; it was nice to catch up with John Milner at Godalming and one or two others.

The cricket itself didn’t last long; Surrey galloping to 157 from 1 in 19 overs before the forecast rain arrived, leaving Jason Roy 93 not out and Steven Davies 42 not out going very well after Aaron Finch had made a quick 17 from 12, hitting two sixes, one off the first ball he faced. 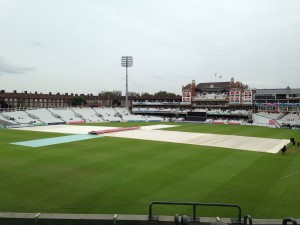 The OSCAs event was introduced by Paul Taylor, (http://www.espncricinfo.com/england/content/player/21484.html), now Director of Cricket Development at Surrey; and guest of honour was Monty Panesar, (http://www.espncricinfo.com/england/content/player/18655.html), who presented the awards and helped fill the time waiting for the cricket to resume with a lengthy but highly interesting Q&A. 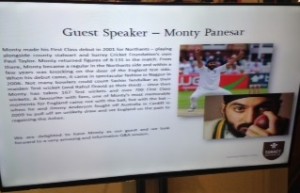 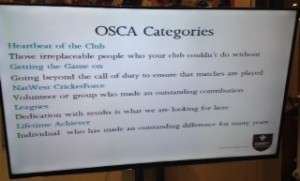 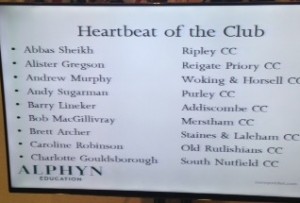 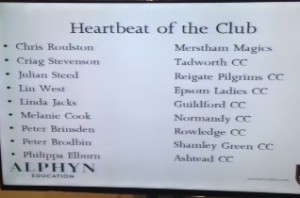 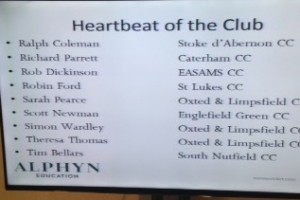 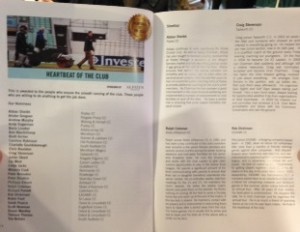 …but having spotted the bit in the nomination about Ralphie doing the washing up(???) – Julie queried this too – and that his Essex background would have put Surrey in an embarrassing position to not find a worthy winner within their own boundaries, the Committee gave the award to the Chairman of Tadworth CC. Well done him.

Thanks to the Surrey Cricket Foundation for hosting an excellent event.

Next up for Stoke is an under 19 T20 Blast match at home to Walton-on-Thames tonight, 6pm start; the regular Wednesday nets & social from 6pm tomorrow and more colts matches before the weekend programme of League, Trust League and senior friendly matches.