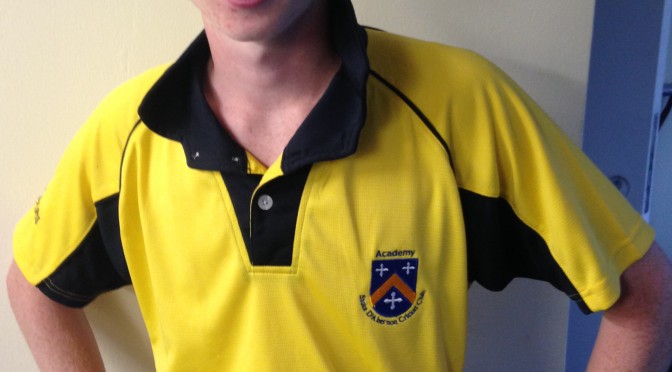 Stoke’s stop-start Under 19 T20 Blast campaign finally got going again, and their points total and net-run-rate received a nice shot in the arm with an efficient win at Oxshott; untidy in places, notably the extras conceded count, but overall whole a very good night’s work.

Stoke’s 2015 Under 19 Captain Baz Medlycott won the coin toss against this year’s leader Giacomo Gray and Oxshott’s openers took guard from the umpires, both of whom were supplied by Stoke.

The match advanced quickly with newcomers to the competition Oxshott showing a number of the failings Stoke demonstrated in their first season; notably the inability to preserve wickets in the power play overs.

Ryan pulled the first ball of the match from Cam Tarbet for four but was tucking his bat under his arm off the next legitimate delivery when he slashed at a wide one and edged to Olly Trower behind the stumps.

Aided by a number of wides the total reached 29 by the end of the third over; but Stoke then took three quick wickets to get ahead. The first saw Shaw hit Freddy Zander to Ed Ashwell, (Zander ragged the first ball he bowled from outside leg-stump to a slip angle to scramble the mind); Nico Spreeth castled Stephen and with the total on 41 Medlycott had the choice of which part of the parish to hit a rare Zander bad ball, but succeeded in picking out one of the two fielders outside the circle; Ollie John showing good hands at deep mid-wicket.

Zander and Spreeth bowled their allocations in one go; registering figures of 4-0-17-2 and 4-0-19-3 respectively. Spreeth picked up a couple more when one former Stoker Depree was stumped, then another, Green, hit a return catch to him. Stoke were in good shape with the board showing 64 for 6 in the 11th over.

Next pair Parker and Murphy both made 15 to give the total some substance, but were removed by the Townsend brothers; Jack finding the former’s edge; Ben forcing the latter to drive loosely to cover where Gray took a good diving catch; the highlight of an excellent fielding effort.

Gee and Rasmussen moved the score towards a run-a-ball-chase, but the last two wickets fell with the total on 114 and 115. John bowled an excellent comeback over; the pressure he created saw both wickets go to Alex Clinton who skidded a straight one onto Gee’s pads, then John himself took a good low catch on the circle to account for No.11 Clement and close the innings. 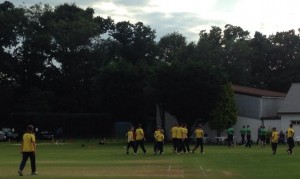 Stoke’s reply started unusually. The second ball of the innings saw a massive five leg-side wides that just about held the line of the adjacent strip; the third was equally wide the other side by Ashwell who managed to reach it and scoop it to the keeper. 5 for 2 (0.2)

Trower and Spreeth batted with more patience and the board ticked along nicely. Trower opened his account with an audacious reverse sweep for four off Medlycott; and the right-hand/left-hand combination provided another challenge for the bowlers.

The result was a partnership of 50 in exactly seven overs. Spreeth had made 20 of them including a couple of fours off Medlycott, but the same bowler had the last word when he castled him attempting another.

Trower was joined by the in-form Curran and the pair worked well together; the former keeping the board moving with some well-placed shots whilst the latter got himself in. After a few sighters Curran’s first two scoring shots were nice straight sixes off Ryan to spread the field; and a number of singles on offer were then readily accepted…although this reverse pull ended up dribbling to the man on the circle for a dot.

Trower’s love for the competition continued, (he now averages 64.00 in his seven matches), and he retired on 51 not out from just 36 balls faced with nine fours.

Gray came in and helped Curran, (27 not out from 32), knock off the remainder of the runs; Gray ending matters by smashing the winning hit down the ground for four.

The match was played in front of a good crowd. Oxshott put on a good Blast experience with music, a BBQ and a fully-stocked bar. We’ll be back next weekend for the 1st XI fixture.

As for our Under 19s, we host Walton-on-Thames on Tuesday, but the games against Esher and East Molesey still need to be re-arranged. It could be a busy week for those tasked with getting these games on!