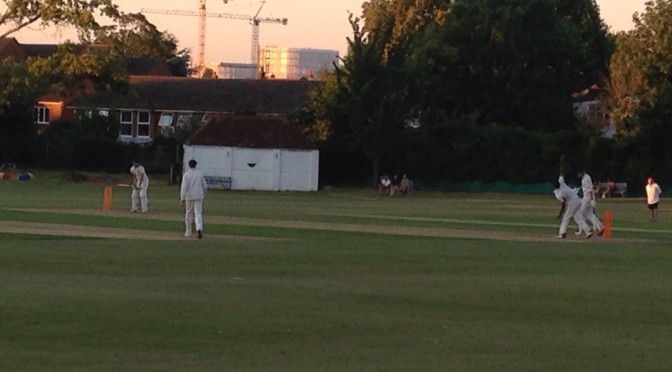 Great relations between Stoke and Sutton were further enhanced as both Clubs got a game on despite Stoke not having enough Under 17s, (due to holidays), to play the original cup tie. The Stokers originally selected, (many well under the age of 17), were supplemented by some senior assistance from Rod, Ralphie and Charlie Thomas.

On a very warm evening Sutton, with some of their best youth in their side, chose to bat first on winning the toss. This was the only blot on captain Alastair Curran’s record for the night as he led the side well and later on continued his good form with the bat.

Starting with spin from one end, (Ben Holder), and seam at the other, (Thomas), both opening bowlers took a wicket; Holder striking first when J.Patel dug out a yorker but didn’t spot the danger of leaving the crease before Rod saw the opportunity for a stumping. 5 for 1 was soon 8 for 2 when Boys mis-pulled a Thomas delivery to Curran at mid-on.

A partnership of 53 for the third wicket between Blake and Sanjay Patel saw the run rate start to climb. The boundary runners saved a lot of runs; and the partnership was broken at just the right time when Patel pulled a delivery from Luke Kirchner, who impressed again, to square leg where Zach Gilbertson took an excellent one-handed catch. 61 for 3 was soon 77 for 4 when Blake was run out by Alex Clinton who showed great composure and presence of mind for one so young to get to the ball quickly and bounce in a low throw in to keep it under the eye-line with such a low sun.

The talented Sutton middle order upped the run-rate towards nines, so Curran asked Ralphie to bowl a couple of overs to slow things down; this helped set up a flurry of late wickets with the hosts having a mini-collapse from 129 for 4 to 138 for 8.

Three of the wickets were taken by Tom Lawes who earned a full four-over allocation with excellent run-restricting bowling; the only boundaries he conceded were a yorker jammed out through point and a Chinese cut. In between he castled Kennett for 23, snared Fenwick leg-before first ball and forced Ogulana to chop on trying to up the scoring rate.

Lawes’ wickets, (earning him the match’s best figures on either side of 4-0-28-3), sandwiched a comeback wicket for Thomas who picked up Neale-Smith for 38, Holder showing his usual ice-cool approach to his fielding by holding on easily at deep long-on.

A few late singles, (no boundaries as the death bowlers did their jobs), and a couple of overthrows saw a final total of 147 for 8; a very decent effort by Stoke on a hot evening that included a drinks break ten overs in.

In reply Stoke lost debutant Lorenzo Fourie in the second over; and Holder dragged a long-hop on to his stumps for 9 in the third, (15 for 2), but Curran and Clinton brought the fifty up off the first ball of the eighth over to keep Stoke on target.

Despite scoring just nine, Clinton played nicely against much older and quicker bowlers than he has probably faced before, and it was a shame to see him chip one to cover when well set.

Kirchner joined Curran and the runs continued to flow. Kirchner struck the ball cleanly for a Stoke career best 24, (20 balls, 1×6, 3×4); but the crucial wicket of Curran was lost at a key time, (the end of the 11th with the total on 89), when he mis-cued one to mid-wicket that would have gone for four had it been a yard either side of the fielder. Curran checked out on 45 and faced just 30 balls for his runs.

Having not picked up a bat in some time, Thomas took a little while to get going as the Sutton change bowlers dragged the run-rate back to their advantage. Stoke were forced to take a few more chances and with one exception nothing really paid off.

Kirchner was bowled behind his legs; Lawes was beaten by a throw from deep mid-off to the keeper attempting a second run; Alex Thomson hit one four before missing a straight one; Thomas made just four before doing likewise and Gilbertson was bowled off the first ball of the final over that started with 20 needed to win.

Thomson Snr got Stoke half-way there, taking his score to 19 not out off 10 balls in the process; but Stoke eventually fell a little short in a match played in an excellent spirit.

Once again, Stoke, (and Sutton), have shown that where there is a will to play a game of cricket much can be gained from it. A great experience for the younger ones who all did well, and middle-time and overs & fielding into the legs for the older ones to keep them ticking over.

Thanks to Sutton for being great hosts. Hopefully we can retain what are now becoming regular opponents in many formats – T20, Sunday XI and Cricket Weeks – on their fixture card for years to come.