“We got schooled” was the verdict of the Malden Wanderers coach as Stoke’s Academy commenced their 2016 Surrey Trust League campaign with a commanding performance at the Rec. The visitors were only able to fulfil the fixture after their Under 15s match was cancelled, and their young side ran into a well-drilled Stoke unit that was a little older and stronger all round.

Oliver Trower stood in as acting captain in the absence of his brother who was allegedly revising, (following the Club’s Twitter feed is revision, skip?), and other senior Stokers who were unable to play. His first task was to win the toss – epic fail and Stoke were in the field.

Progress was initially slow against accurate bowling from Trust League debutants Jack Kirchner and Charlie Stamp, although a couple of tired overs at the ends of their spells left the visitors 33 for 0 after eight of the allotted 40 overs.

Billy Zander came into the attack and calmed the batsmen as they were looking to cut loose, and this allowed another ‘older’ head in Jack Townsend to get Stoke on the board when he got the zing bails flashing after castling Dodd for 9.

Zander got a deserved first wicket in the 15th over when No.3 J.Marks chipped to Jack Kirchner in the covers, (48 for 2); and scoring was difficult as these two bowlers shared 9.1 overs taking 2 for 21, eight of these coming from edges through slip.

Just as opening bat Joe Lavender, (brother of former Stoker and now expectant father Jake – Dad Stewart advised Jakey now resides in Ireland), was starting to move the board, he played back to one from Zander that slid on and the visiting panel umpire raised the finger. 70 for 3. Zander bowled his eight over allocation in one spell, mixed things up nicely, found a nagging length, and returned figures of 8-2-18-2.

With plenty of bowling options Trower gave spells to Ben Townsend and Luke Kirchner next. The former found his lines after a couple of nervous overs, (figures always seem worse than they actually are when the leg-side wide rule is in operation); but the younger Kirchner struck gold straight away; becoming just the second player to take a wicket with his first ball in Trust League cricket, (the other was James Trower : http://sdacc.play-cricket.com/website/results/1105174), when Williams – who looked good for his 14 and it could have been more after he drilled a lot of nice shots straight to fielders – was bowled.

Williams’ wicket brought M.Marks and Morris together and they put on the only other real partnership of substance in the remainder of the innings. They added 38 as more bowlers got their turn; Ollie John and Ed Ashwell getting a go with the ball and doing OK.

The pair were separated when Marks was lot to a run out trying to up the tempo, beaten by a good throw from Jack Kirchner attempting to complete a 2. Marks made 29 and hit the only six of the innings. Morris was bowled by the returning Jack Townsend for 14 soon after. 128 for 6.

No.8 Shepherd joined Shepherd and they advanced the score from 128 to 142 before the innings ended in a hurry; four wickets on consecutive deliveries to be precise!

The elder Townsend finished with Stoke career best figures of 6.3-1-17-4 to maintain brotherly hierarchy on the day, although little bruv still has more wickets for the Club this year than you, Jack!

Jo takes Trust League Sundays off from tea duties, so Sarah kindly stepped in to provide a huge spread – she must have known a sizeable away support would be coming, but it even beat them!

Full of food, Stoke openers Medlycott and John showed a similar appetite for runs and effectively won the game as a pair with a huge opening stand. The youthful Malden Wanderers attack showed a lot of inexperience and would ultimately gift 36 wides and eight byes to the cause as well.

When the batsmen could reach the ball Medlycott hit a few release shots for boundaries. John was more patient and showed good technical skill on a pitch that started to keep a little low on occasion and he dealt mostly in singles. Although not as fluent as last week, John again showed everyone that he was putting his record on the line and gave nothing away.

The extras count meant that runs came quickly. 40 off the first eight, 83 off 16, and it was 106 at the 20-over mark. Visiting skipper Lavender opted to give several bowlers short spells rather than go for more senior bowlers like himself to make things happen.

As the game drifted towards its inevitable conclusion, Medlycott completed his fifty from the 65th ball he faced and then plundered 14 easy runs, including his second six, off eighth bowler M.Marks’ first over.

A ten wicket victory was on the cards until Medlycott ran himself out in front of Dad for a Stoke career best 67, (80 balls, 2×6, 4×4), with the total on 138. This was a record Stoke Trust League opening stand, the previous record, (Subba Row & Hopton : http://sdacc.play-cricket.com/website/results/2342652), lasting just one match.

No.3 Harry Ross had time to hit one boundary in the remainder of the 26th over; John finished the match off the second ball of the 27th when he hit his fourth four to finish unbeaten on 31 from 73 balls faced.

The match was played in an excellent spirit overseen by two jovial panel umpires. On this occasion an older and more experienced side had a bit too much for a more ‘development-esque’ opposition; but these things are cyclical – Stoke have been on then end of a couple of these games in the past – and the visiting players should still gain a lot from their day. They had some players that showed a lot of potential.

So four points bagged and Stoke’s runs-per-wicket quotient, (the method of resolving divisional tie-breakers rather than head-to-head), is already in good shape. Stoke’s next Trust League fixture is on Sunday 19th June at Godalming.

Clubs don’t have to play all their matches on set weekends, so some entrants have already played a couple of matches whereas others are yet to start. Here is the early League table: http://ssdl.play-cricket.com/website/websites/view_division?id=63772 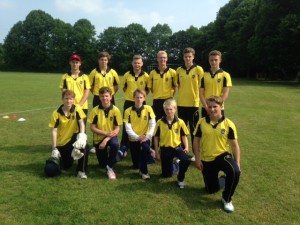