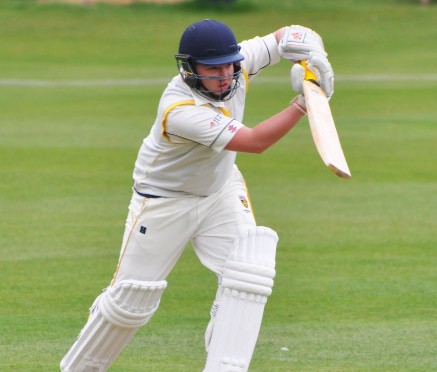 The winning run for Stoke’s 1st XI continued with a narrow victory at Old Pauline, a step up from last week’s performance at Chertsey and a polished all-round performance in what turned out to be a very tense match that went all the way to the final ball, the hosts needing a six, (or a five), off it to win.

Paulines appeared to have several ‘imports’ for the day, the most important one being Roots, (wearing a shirt that carrying the words “Foxton – Village Cricket Finalists 2015” – see below), who took two wickets in a tidy spell of off spin and followed this with a knock of 106 not out. Roots’ quest for glory was marred by a serious pull to his hamstring on the penultimate ball, meaning that he faced the final ball with a runner.

Paulines put themselves under pressure in the field by bowling 29 wides and 2 no balls and it could be argued that this was the difference between the two sides. Stoke’s top four were never under pressure to score early runs because of the wayward nature of the seam attack.

There was a 1st XI League debut for Max Subba Row and he constructed a fine innings of 43, adding 81 for the first wicket with Steve Wade who made 27. James Trower, (45), and James Whitmarsh, (30), carried on the good work but both were back in the pavilion some way short of the 200-mark so work still to do.

Once pace was taken off the ball, it became a much tougher challenge for the middle and late order batsmen to maintain the impetus that had been established. For the second week in succession, Jase Earl scored important runs at the death after a few more wickets were lost in the pursuit of quick runs. Earl (24 not out), was ably supported by Matt Gottschalk, (15 not out), to add an unbeaten 34 for the ninth wicket to close the Stoke total on 229 for 8.

On taking the field, Stoke’s opening pair of James Miller and Toby Tarrant bowled great lines and lengths, starving the top order of easy runs. Tarrant was the standout performer, bowling all his 10 overs unchanged for a return of 1 for 29. Miller’s initial five over spell was equally impressive, as was first change bowler Roddy Kelso. The final bowling figures don’t tell the full story.

The hosts lost Lala for a duck to Tarrant but Nijjar hit 55 of the 76 scored to the point of his dismissal, a wicket for Gottschalk courtesy of a catch by Earl.

Roots carried things on but lost a succession of partners to run-outs; one for Ian Hopton, one for Earl, one for Subba Row and one for Miller who also collected the wicket of overseas Damon for 19.

Having fallen behind the run rate, the Paulines required 8 an over off the final 20 and, whilst there was a flurry of late batting action that damaged what had thus far been miserly bowling figures for Kelso and Miller, Stoke’s excellent performance in the field saw them home.

Roots’ seemingly lone fight to the end saw him unbeaten 106 off 135 balls before being presented with the last ball equation that proved a task beyond his hamstring, Miller being the bowler trusted with the final over.

An excellent and disciplined overall performance, well captained by Trower and every member of the team played a part.

This win lifts Stoke to mid-table, but only a few points separate many of the sides and they could, depending on bonus points, overtake next week’s opponents Oxshott with a win.