It was Twenty Years Ago Today…

Back in 1996 Stoke started their third season in the Fuller’s League with a game at Effingham. Back then there was no extensive pre-season programme like we have today; people often pitched up for the first League match to start their season…unless they sneaked a Sunday friendly match in.

What happened that day was truly remarkable and a game that is still talked about by those who were in the Club at the time. The main man himself has been in touch with his recollections of the day:

Unbelievably it’s 20 years since THAT match at Effingham. Play Cricket preserves the scorecard but I thought I’d share a few memories of what was my finest contribution in a Stoke shirt.

For those of you who don’t remember me, I played for Stoke from 1994 to 2005, mostly as a Second XI bowler. At the start of the 1996 season the Club was struggling for numbers – in particular attracting 1st XI standard players.

So the team picked to play away at Effingham early in the 1996 season featured 7 players, (me included), who had contributed mainly in the Seconds or Sunday XIs.

Gavin, (son of Roy), Johns lost the toss, and Stoke were put in to bat on a misty, damp Spring day. Steve Eggleston, Pete Farenden and Gav himself were arguably the only first XI standard batsmen on show. After two early wickets, Gav and Pete put on the only substantial partnership for Stoke, (76 for the 3rd wicket.) The rest of the innings was held together by Pete who batted brilliantly on a sluggish, difficult track for an accomplished 84. Gav actually managed to declare at 55 overs with the score on 148-9.

SDCC adds : There was much debate on the declaration. 148 didn’t seem near enough and by rule you could bat beyond the 55 overs, (up to 65), forfeit your batting points and hope the opposition would throw their wickets away with a kamikaze run chase. Farrers’ dismissal off the last ball of the 55th made the decision for us.

This meant Effingham had around 45 overs to score 149. They started positively after an early wicket for Roy Johns, and Gav found himself struggling with an honest but unthreatening attack. Gav took the second wicket at 73, but the runs kept coming and victory for Effingham seemed a formality. The score had reached 80ish-2 when Gav then threw me the ball. As soon as I started bowling, the ball started swinging prodigiously. I remember Chris Burns plucking a fantastic catch out of the air for my first wicket, and then Farrers taking another at slip the next ball.

The wickets suddenly started tumbling and for once in my Stoke career – I can’t remember any others – I was pretty much unplayable. I remember Alan Day behind the stumps coming up to me and telling me not to strive for wickets – just let the swing and the pitch do the job.

When Mike Baker took a stunner to get rid of their number 3, the door was open with Effingham at 105-5. I really had no idea how the ball was coming out so perfectly – it was just one of those days. With the ball swinging round corners, we felt we could win it. Two wickets in two balls, (again), at 119, (both bowled by perfect in-swingers – to give me 5), and suddenly Stoke were favourites at 119-7.

I was certain we would win. They only needed another 30 but it was one of those situations where an easy score on paper looks impossible. I took two more wickets to take it to 7, then Ralph finished it off, (that was my wicket Ralph, it should have been 8.) We won by 22 runs.

Ralphie adds : Stick to 7! I had Jez Downer, (gun player for them at the time), plumb in my first over but you never got given a thing at 1st XI level with player umpires back then!

These things really don’t happen that often in cricket, but when they do, the feeling is unparalleled. I never took 7 wickets again for Stoke. In fact, I’m not sure I ever took another wicket for the firsts. I played again the following week and didn’t get a bowl when lots of the regulars were back. After that, I went back to the Seconds and after a few years lost my “unique” action to the yips.

I played my last match, (to date), for Stoke in 2005, (as a batsman), but was living in Bath and could only make the journey occasionally. My son has inherited the cricket bug and will make his debut against Stoke in June for the Under 8s. I hope he has as much fun in cricket as I have had. 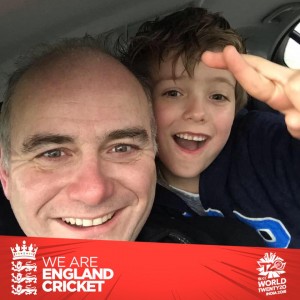 Andrew’s effort won the Club’s Individual Performance of the Season award for that season, (see here fore the full list : http://www.stokecc.co.uk/honours-board/), and his full Stoke career record is here : http://sdacc.play-cricket.com/website/player_stats_widget/bowling_stats/23480?rule_type_id=179

Andrew performed many roles for the Club, notably Secretary, (and acting Treasurer when the man in that role at the time left all the Club accounts on a train one day!) – arguably his greatest Legacy to the Club, though, was the creation of http://www.stokecc.co.uk/ when web-sites were a new thing.

As you say, Andrew, the above is your career record to date and we hope to see you and Ollie on the field together in Stoke kit one day.

So what else happened in 1996?
Leicestershire won the County Championship, Lancashire did the Benson & Hedges Cup and Nat West Trophy double. Surrey won the Sunday League : https://en.wikipedia.org/wiki/1996_AXA_Equity_%26_Law_League

Manchester United won the Premier League & F.A.Cup double, Eric Cantona settling the most dull of Cup Finals with an injury time strike to defeat the Spice Boys of Liverpool – who can forget the suits they wore! (Leicester won the equivalent of the Championship Play-Off Final that season.) In pop culture the Spice Girls emerged as Take That announced their split.

Football continued into the summer as the European Championships were held in England where the host nation lost on penalties in the semi-final to Germany, (a goal by Alan Shearer in a 2-0 win over Scotland in the group stage going in when Andrew was batting at Alleyn! – http://sdacc.play-cricket.com/website/results/2323081), and Three Lions (Football’s Coming Home), was easily the catchiest tune: https://www.youtube.com/watch?v=RJqimlFcJsM

In the UK charts “Killing Me Softly” by The Fugees, (well, not by them – it was a cover version!), was the best selling single of the year; “Jagged Little Pill” by Alanis Morissette was the best selling album, just beating “(What’s The Story) Morning Glory?” by Oasis and “Spice” by the Spice Girls.

Stoke’s 1st XI ultimately finished mid-table…but we had some silverware that September as Logie Logendran’s 2nd XI achieved promotion to the top division of the Fuller’s League, Gary Harkett also picking up the League Bowling Award.