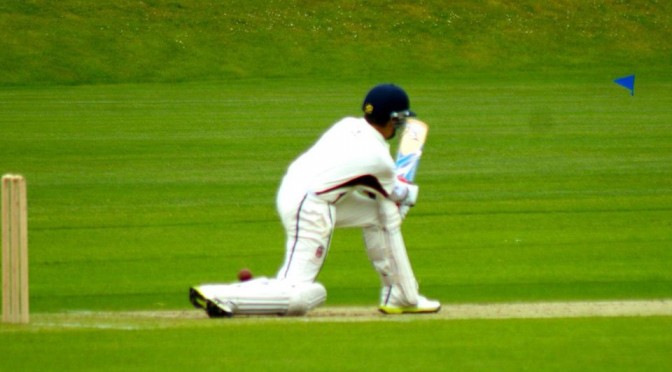 A second seven-wicket win in as many weeks consolidated Stoke’s position in the table after ending league leaders Guildford City’s unbeaten record that stretched back to last August.

There was a strange start to the day. Only three opposition players were at the ground at the time of the toss, (alleged traffic issues weren’t supported by any search of the web), but Stoke skipper Jase Earl had the courtesy to not enforce the toss, although he won it anyway and chose to bowl. The majority of the visiting team arrived at 1pm, as was the case in the match earlier in the season.

What looked like a five minute delayed start then turned into a fifteen minute one as two of the latest arrivals were actually the opening batsmen. Those originally tasked with standing in were withdrawn under starters’ orders by visiting captain Mutucumarana and went off for some throwdowns, and the Stoke fielders, in position and ready to go, had to wait another ten minutes in the sun whilst the openers needed hauling out of the changing room.

When the game eventually started there were two games within a game. Alex Bond got a delivery to lift from the pitch that opener Ramanan could only glove to Malcolm Dickson, (the irony wasn’t lost on the fielders that the No.3 batsman Ul-Haq was in in the first over anyway), and he reeled off a succession of maidens at him; whilst at the other end Duncan Elder bowled well without luck as Gayathra dealt almost exclusively in boundaries. The batsmen hardly crossed.

When Gayathra eventually faced Bond again, he castled him for 32 of the 38 runs scored to that point. Bond’s opening ten overs only cost five runs, one of which was an overthrow. Great work on a hot day.

All Stoke’s bowlers made the batsmen work hard for their runs; only 57 came from the first 21 overs. Just as No.4 Neveendra started to look more expansive, he was leg-before to Earl for 25 with the total on 70. Earl’s spell ended up being a short one as he appeared to suffer from having a lack of fluid on board.

Drinks were taken at 74 for 3, and word had clearly been given to Ul-Haq to get on with things after the resumption. Hitting out didn’t appear to be his game, though, and he skied Ralph Coleman’s second ball to Alex Bond. He had occupied the crease for 28 overs for his 14.

Malholtra and Mazeez batted more purposefully, and moved the total to 116 before they were separated when Malholtra, (28), hit out at Ben Holder but fell to a great catch at mid-on by Steve Wade. Holder was in the middle of an accurate, probing, twelve over spell, and next ball Abdulla flashed at one and was easily caught by Andy Page at slip.

Mazeez and Mutucumarana then added 51 for the seventh wicket. Earl used more of the number of bowling options at his disposal trying to separate them, and it was eighth bowler Dan Gluckman who broke the partnership when he held the second of two return catches offered to him by Mazeez who top scored with 42.

Baz Medlycott took the next two wickets with the total on 181 when Mutucumarana, (19), hit to Bond; and Nadeshan was superbly caught by Page at slip. Hopes of a facing similar target to chase for the third week running were dashed, though, as No.11 Rathayake, batting in grey chinos and a polo shirt, swung at everything and connected with a few, including a six, to make 17 out of a last wicket stand of 21.

Despite missing a run-out opportunity; Medlycott did end the innings when he dismissed Zarrar leg-before to close the innings on 202 and finish with 3 for 31 from 6.4 overs, (figures that might have been better had some advice been taken on board); but the visitors clearly thought they were short of runs having batted on to 54.4 overs. Bond’s final figures were 12-6-20-2; Holder’s 14-4-41-2.

Jo’s excellent tea put the players in a good mood for the run-chase; and although Medlycott was an early casualty when he got a good nut from Nadeshan; Page and Holder batted sensibly and at better than the required rate.

Mutucumarana tried several bowlers in short spells trying to find something that worked; but the pair batted on as nearly all members of the 1st XI returned to HQ to cheer the team on. They were treated to a second-wicket stand of 121 that was ended when Holder was bowled by Ramanan for an excellent 59 from 69 deliveries with nine fours.

Page followed in the next over for an equally valuable 52, (80 balls, nine fours) – his second fifty in as many weeks – when he was bowled by the returning Nadeshan; and a re-vitalised fielding side sensed an opportunity at 131 for 3 in the 28th over.

However this was snuffed out by Gluckman and Earl who knocked off the remaining runs despite attempts to break their rhythm, one of the more interesting tactics was to debate the minimum number of overs Stoke had to face. In the end this didn’t become a factor as Gluckman, (34 not out from 42 – his highest score in league cricket), and Earl, (37 not out from 43), returned to the pavilion triumphant with the best part of five overs to spare.

Another good day, and a bit of momentum has started to build. Next week Stoke are back at the Rec again, looking to complete a win double over Alleyn.