In 2019 the Stoke D’Abernon Ladies will compete in the Surrey Women’s Trust League and the Surrey Slam.

Here are the fixtures:

SURREY SLAM (West Division)
Play by 19th May – Shepperton (Away)
Play between 2nd June and 15th June – Chertsey (Away)
Play by 23rd June – Ashford (Home)
Play between 30th June and 13th July – Guildford (Away) #
Play by 21st July – Twickenham (Home)
Play between 28th July and 10th August – Guildford (Home) #
25th August – Whatever position we finish in the West Division we will play the team who finished in the same position in the East Division
# The League seem to have us playing Guildford twice! Clarification being sought! 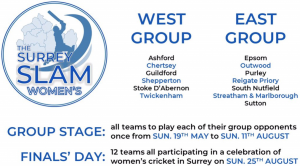 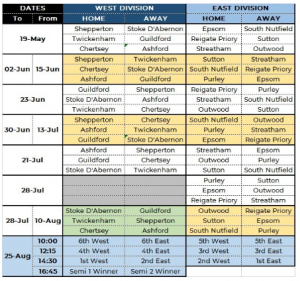 Dates for both competitions are the dates by which matches have to be played, not the exact dates, although we expect most Trust League games will be played on the Sunday referred to above and the Slam games played mid-week…but we may have a full day with a Slam game in the morning followed by a Trust game.

Care when you read them on Play Cricket. Guildford’s home ground is called Stoke Park!